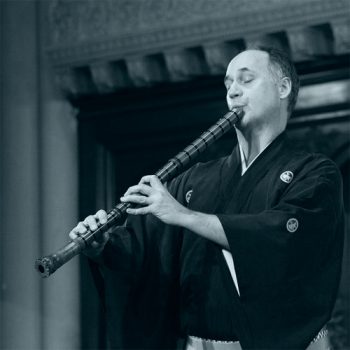 Marco LIENHARD lived in Japan for 18 years (1981-1998) as a member of Ondekoza, the legendary Japanese professional Taiko group, whose members were renowned for completing the Boston Marathon and then energetically playing Taiko for other runners as they crossed the finish line. During his years with Ondekoza, he mastered performing the taiko, fue, Noh theater flute and, under the tutelage of YOKOYAMA Katsuya, the shakuhachi. Marco was Ondekoza’s principal soloist on the odaiko, nagado, shinobue and shakuhachi. He was greatly influenced by the stage vision and presentation of taiko by Ondekoza’s acclaimed Founding Director DEN Tagayasu, who instigated the renaissance of taiko and created what modern taiko is today.

From 1990 to 1993, Marco LIENHARD’s most remarkable accomplishment for Ondekoza was organizing a three-year long, 9,000 mile run around the perimeter of the continental United States in which the group’s members, including Marco, ran the entire distance while performing in communities along the journey.

In 1995, Marco was featured as the shakuhachi soloist during the New York City Opera’s premiere of MAYUZUMI Toshiro’s opera ‘Kinkakuji’ and with the Juilliard New Music Ensemble for the premiere of HOSOKAWA Toshio’s ‘Voyage X.’

He is presently the Director of the New York-based Taikoza (taiko, shakuhachi and dance ensemble) and East Winds Ensemble (shakuhachi, koto, shamisen and piano). Marco regularly performs as a solo artist and teaches internationally to students in the United States, Argentina, Brazil, Uruguay, Italy, Switzerland and Canada. He has performed at Carnegie Hall and Madison Square Garden (New York), Suntory Hall and Osaka Festival Hall (Japan), and Tchaikovsky Hall and House of Music (Moscow) among other venues throughout the world.

Marco has composed and recorded more than 10 CDs, showcasing shakuhachi, taiko and fue. His music can be heard on iTunes and the Nintendo Wii game: ‘Red Steel’. In 2015, he released two CD of his compositions with Taikoza: ‘Voice of the Earth’ and ‘Tree Spirit’. He has published a book on the shinobue in 2017. 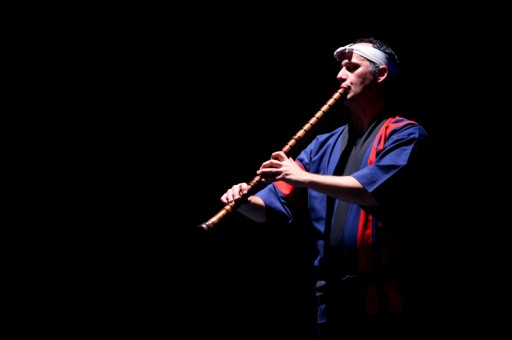