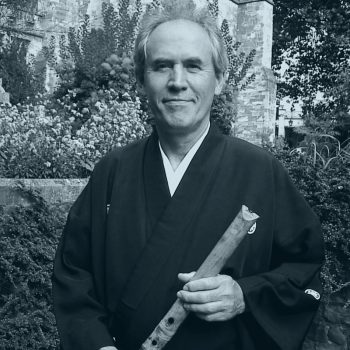 Michael Soumei COXALL studied sankyoku and honkyoku shakuhachi in Japan for many years under the legendary Kinko Ryū, Chikumeisha master and Living Cultural Treasure, the late YAMAGUCHI Goro, and still continues his studies with MIZUNO Komei on frequent visits to Japan. He also studied shinkyoku under SUGAWARA Kuniyoshi in Tokyo.

He was awarded his shakuhachi ‘Master’s Licence’ in 2007 and the professional name ‘Soumei’. He taught full-time at SOAS, University of London from 1986 to 2009. He now just teaches Chikumeisha honkyoku, sankyoku ensemble and shinkyoku music in the UK.

Michael has performed widely in the UK and Europe as well as in Japan including at the National Theatre in Tokyo. He is also the founder member of both the ‘London Hogaku Ensemble’ and the ‘Hibiki Ensemble’ and is a member of the Chikumeisha-kai. He was also co-organiser of the ESS Summer Schools in London in 2006 and 2011, and in Barcelona in 2016.