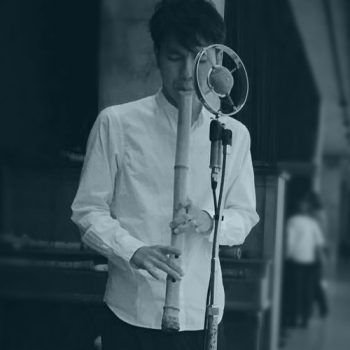 At the age of 20, ORIMO Sabu was profoundly moved at hearing TAKEMITSU Toru’s ‘November Steps’ and the recordings of WATAZUMI Doso. He began harvesting bamboo and making jinashi shakuhachi and performing. He then studied classical honkyoku with OKUDA Atsuya for one year.

His recordings include ‘Ichi-on (Single Tone)’ and ‘Susabu’, both in 2006, the cassette tape album ‘Solo Shakuhachi’ in 2007, the Siwa Records LP ‘Wind Songs’ in 2009, and ‘Kamakura 12 Places’ with Innerside Records in 2012 (selected by Music Magazine as top ten for the year). His 2015 self-publication ‘Moon and Stars’ was selected by the Australian Forever Now Project and was blasted into space with other artistic creations from around the world. He also performed at the 2017 Montreaux Film Festival. His performance of ‘Tamuke’ and improvisations were used in the movie ‘Right of Way’, directed by the Benyami Brothers.