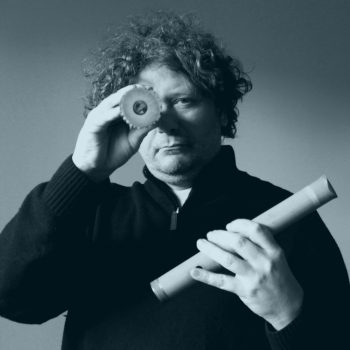 He received a MFA in Fine Art Media from the Slade School of Art in London (1997-99), while being a recipient of a British Academy and Humanities Research Board grant award.

Projects include a site-specific projection of digitally manipulated Playstation characters (Stationary Play Series) in Les Arènes de Lutèce at Nuit Blanche, Paris, remaking his father’s old tourist movie of 70s London, frame by frame (London/London), condensing a century of cinema into a 100-minute film (The Cinema Machine), and tracking himself a year long with a GPS receiver (www.gpsdiary.org). KNAUB has presented his artworks and projects in countries including the UK, Europe and beyond.

Currently he is studying the shakuhachi honkyoku repertoire of the Kokusai Shakuhachi Kenshūkan (KSK) with FURUYA Teruo sensei, KSK’s principal teacher and himself a life long follower of the late YOKOYAMA Katsuya, the founder of the KSK.

KNAUB discovered the shakuhachi when encountering two Japanese musicians in India in the early 90s. Being fascinated and taken in by its sound and versatility, he, after settling in London a few years later, started to tackle the shakuhachi through a mixture of attending group workshops, lead by Michael Soumei COXALL (Kinko Ryū Chikumeisha), individual lessons with Clive BELL and experimentation.

His experiments with the shakuhachi have lead him to record a CD and produce a short film in and around the abandoned cold war listening station situated on Teufelsberg (Devil’s Mountain) outside of Berlin, Germany, in an attempt to weave together notions of architecture, history and site-specific improvisation. (‘Listening Station – music for abandoned structures and shakuhachi’.)

Furthermore KNAUB attended various workshops and events organised by the European Shakuhachi Society (ESS) and is currently an active committee member of the ESS, being responsible for their online presence and maintaining the video/audio archive. KNAUB is also significantly involved in some organisational aspects of the current WSF in London, ranging from contributions to programming, designing the visual materials of the festival to creating the WSF2018 website.

He shares his time between Paris, France and London, UK and recently extended his exploration of the shakuhachi by making jiari shakuhachi in his workshop in Paris.